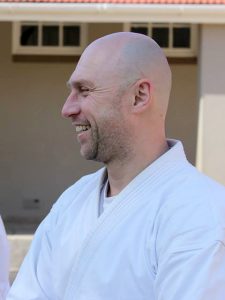 Sensei Gerjo joined SPARTANS DISCIPLINE EDUCATION PROGRAMME in 2009. He is 2nd degree Black Belt in Shorin-Ryu Shorinkan. He is a Gold medal recipient at the 2014 World Martial Arts Games held in Vancouver, Canada, recognised by the IOC.

He joined the DISCIPLINE EDUCATION PROGRAMME to have the opportunity to give back all the wonderful knowledge and opportunities that were given to him by his Instructors as well as to Save and Change Children’s Lives!

THE JOURNEY THAT NEVER STOPS!!!

The journey of a thousand miles must begin with a single step: My single step started in 2009 when I attended a self-defense class with Renshi Andries Douglas; never in my life had I dreamt I would become a black belt in Karate, it was just stuff you read about in a magazine and saw in the movies. Later that year I was the winner of 2 gold medals at our Shorin-Ryu Nationals and I never looked back on that journey. In 2012 I became a Black belt and in 2014 I became a TAFISA World Champion in Vancouver, Canada, at the World Martial Arts Games. Not bad for an “outjie” who grew up in a small town called Garies.

Karate taught (and is still teaching) me a lot of stuff, but the one lesson I cherish the most, is the Character it builds in me and also in the students I teach. Karate has taken me on a journey much further than a 1000 miles and I am sure it will take me much farther still, in life. So just sit back and enjoy the journey that never stops.